As the Referrals Director at JRC, I have the opportunity to encounter a number of agencies that deal with a very difficult population of developmentally and emotionally disabled individuals.

These agencies include school districts, psychiatric hospitals, public and private mental health agencies, and criminal courts and affiliated agencies, as well as other service providers. Most often I am visiting these agencies because they have come in contact with a student who has defied other means of treatment or has such difficulties in his or her current setting, that no other program is able to offer educational services.

As all of my colleagues here at JRC do, I stress our ability to effectively educate students without the use of medication, and our willingness to accept even the most difficult students without the threat of expulsion. Often parents and agencies have received assurances from programs that they are able to manage students with severe maladaptive behaviors, only to have the child referred back to the school district or mental health agency that is responsible for ensuring educational and treatment services.

When my colleagues and I meet with agencies and assure them that we are committed to working with the most difficult to treat individuals, we are often met with a fair amount of skepticism. It is gratifying to have the opportunity to work with students who have been expelled or rejected from other programs and see them realize significant progress and achieve goals that they did not think were possible. 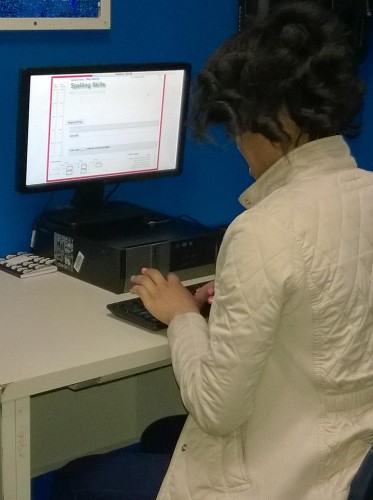 JRC student concentrates on her academic work at her classroom computer.

I recall one young lady who was brought before a Family Court Judge in New York City after having been charged with criminal offenses. The Judge felt that due to the adolescent’s criminal behavior and gang activity, she was not worthy of placement in a private school, which was evidenced by her behavior in court. At the time, the young lady refused to properly address the Judge; she refused to remove her feet from the table and would not take her hat off. The Judge was also concerned that the young lady would elope (run away) once admitted to our school, and offend once again in the community. In spite of her reservations, the Judge was convinced to allow the girl to be admitted to our school. However, the Judge did offer a stern warning that the girl was due back in court in several weeks and the court would not be pleased if the girl failed to attend the hearing or committed another criminal offense.

When we returned to court several weeks later for a subsequent appearance, our student was in a much better frame of mind than at her previous appearance. She was genuinely happy and sociable. Her attire and manners were appropriate and she was very cordial. When the Judge met with her, she was astounded at the transformation in this young lady. Our student stood up when the Judge entered the courtroom, addressed the court in a pleasant manner and thanked the Judge for the opportunity to attend school. The Judge was speechless and could only shake her head.

After a minute or so, the Judge asked our student if she was taking medication and our student exclaimed, “No, they don’t make me take medication.” The Judge then asked our student to what she attributed such a drastic change in her behavior and demeanor. Our student explained that she had never been treated with such respect, in spite of some difficult behavior that she was displaying in the first several weeks of her admission to JRC. She told the Judge, “No matter how bad I am, they still treat me well and take good care of me. I really want to get my education.” The Judge looked at me and said, “I don’t know how you people did it, but I can’t argue with the results. I am quite pleased with the progress of this young lady”.

I have been before this Judge since then and her skepticism has disappeared.