She says Matthew has done “very well at JRC. He’s very happy, he’s able to pursue various interests. He loves going to the Science Museum, he enjoys looking at birds and going to zoos. He loves classical music.”

Before he came to JRC, Matthew was “in a hospital for over five months, nobody wanted him. He cracked his head against sharp points.” The (NYS) Board of Education “begged me to sign him out of education, which I refused. The hospital didn’t want him. He was in there originally for plastic surgery because he split his head” so badly “you could look into his head.” They “finally corrected that, and they still gave him a lot of medication” and kept staff with him 1-to-1, but if it wasn’t a male staff, “he’d go ahead and bang his head again.” He’d need more stitches each time. 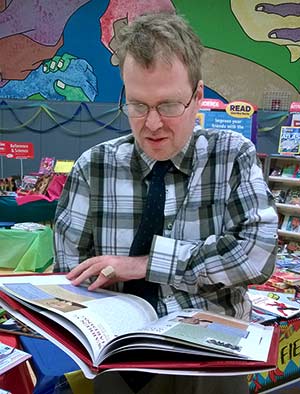 Matty browses the book choices at a recent Book Fair at JRC.

At JRC, “he’s doing fabulously well.” Matthew has a “very structured situation.” With the video monitoring, JRC staff can “watch [even] when he sleeps. He’s watched, and he’s safe, and he tells me he feels safe. Because he’s watched so closely” and kept from self-harming behaviors, “he’s able to enjoy all the things that he likes and he hasn’t been able to before.”

“His identical twin, Stuart, was doing very well, had a job, and worked, when he came out of his school program – he was also in a handicapped program – he had a job for a few years, took public transportation [to it]” but then he lost the job, and is “now on so many medications, his body has swelled up, he’s had a grand mal seizure from the medications, during a snow storm; I wasn’t even able to get to him. He’s become more and more dangerous; he can’t even go to my house [or] to family gatherings. He’s dangerous. I took him out recently, he put his hands around my neck in a restaurant. It’s terrible.”

Mrs. Slaff continues: “The other one [Matty] is doing so well, I can take him out – I never have any of this trouble with Matthew, but Stuart is a mess, a complete mess. Lately he has hardly gone to his day program, he claims he is too tired. They give him too much medication, and in addition to that he’s had many psychiatric hospitalizations, and I know the bills [from the medications and hospitalizations] are very very high.”

“I’m very happy [with Matthew’s situation at JRC] and my whole family is happy. My daughter, who is a psychiatrist with a fellowship in autism, says that this is the only program that is good for somebody with the kind of behaviors that Matthew has shown, and she wishes that Stuart could have access to such a program.” However, the state won’t authorize it, and “insists that the medications and the psychiatric hospitalizations is the way to go.”

“I visit [Matty] approximately once every four weeks and we spend weekends together; he loves to go out, we go to various places around Boston. Stuart, I stopped taking with me, because he’s too dangerous. The house where he lives, they’re very kind people, but they can’t do very much because they’re not equipped” to do anything other than medicate him. The laws in New York State are “causing people to become overly-medicated” and the rules in New York “say no, you can’t do that” [use behavioral methods] “and when you can’t do that, you wind up on medication when you can’t follow a behavior program.”

If your children “have severe, health-threatening behaviors, [JRC] is the only place for them.” With Stuart, who “says [himself] he’s not clear”, because he’s an adult, the program he’s in gives him whatever he asks for, such as “extra portions [of food]”, for instance.

“But Matthew is thin, he looks good, he’s alert; [Stuart] says ‘I have to sleep, I can’t go to program’” because of the medications. And “despite all the medications, he’s wound up in the hospital periodically.”

“Matthew is a happy person, but Stuart is absolutely miserable. They’re giving him what he wants, but he’s miserable, because he knows he wants somebody else in charge, and there is nobody in charge except him, and he knows he’s not capable of being in charge [of himself].”

“I’m very happy with Matty. Most of his tics – and he did have tics, from all the medications – went away. He’s doing very well, he’s very content. He’s no longer overweight from medications, and he’s just a happy happy person.”

“When I speak with my other son, he tells me he’s going to throw himself on the train tracks … he’s gone across the street without looking and almost got killed by a car, and took a swing at a passerby. There’s day and night between the two of them, and they’re identical, they look just alike.”

“I know Matty is so happy, and Stuey is so miserable. That’s the difference. I just love being with Matthew, and I cringe when I have to be with Stuart. I never know what he’s going to do. Matthew, I can take into restaurants, I can take him to shows, music, anything. But Stuart, nothing. Absolutely nothing. Just a lot of medication. He’s going nowhere and it’s very very scary to me. Sometimes I feel like he’s dying a slow death. I sign for the medications because I feel I have no choice, but I know what the side effects of these medications are. They’re pretty bad, like the grand mal seizure he had, and the overweight when diabetes runs in my family.”

“I feel bad and I can’t reason with him; he’s not a reasonable person. He talks, but he says himself, ‘I’m not clear.’ At least I’ve got one son who’s doing all right, but I wish both of them were. If there was any way to get Stuart into a program like [JRC] it would be wonderful. But all they have is drug programs, and the bill for the drugs and the hospitalizations is very very high. So, when they tell me they’re saving money by not having behavioral programs, that’s not true.”

Thank you, Mrs. Slaff, for speaking with us, and for your continuing support of the work that allows Matty to have a good life here at JRC.