I have been a clinician at JRC for over 20 years. People often ask me how I lasted for so long in such a controversial program. The answer is very simple. I have been a part of a team that has improved the quality of life of so many people. None of the negative comments or ridiculous misrepresentations of JRC has ever outweighed seeing a smile on a face that never smiled, or a “thanks for the help” from someone who entered the program full of anger. I’m in touch with many people who spent time here who we were able to help move on to other settings.

I remember one client, AS, who came to us years ago after 12 years of failed treatment. She spent nine years in 11 different residential or hospital settings in Massachusetts, but was expelled or transferred due to her serious aggressive and self-injurious behaviors. During this period she was treated with 14 medications, Paxil, Benadryl, Ritalin, Desipramine, Dexedrine, Trofranil, Trilafon, Lithium, Clonidine, Depakote, Klonopin, Haldol, Seroquel and Zyprexa in various combinations, without any significant improvement in her behaviors.

In AS’s last Massachusetts placement, she experienced 120 physical and 40 chemical restraints in a 28 week period. When all in-state placements were exhausted (I guess it was felt that JRC was too controversial) she was sent out-of-state where, again, medications and other treatments failed and, after 8 months, she was hospitalized in Boston. She was then finally referred to and accepted to JRC. (I like the fact that we don’t reject anyone because their behaviors are too intense.)

When AS entered JRC she was taking Klonopin, Prozac, Ritalin, Tegretol, Seroquel, Wellbutrin, Naltrexone and Lithium. No wonder she couldn’t control her behaviors! When she arrived at JRC she was in an ambulance and strapped to a gurney – they felt it was the only safe way to transfer her. I found her quite charming with a good sense of humor.

We immediately set up a behavioral program to help her reduce her dangerous behaviors. She did okay for a few days but then became highly assaultive and attempted to injure herself. The honeymoon was over. 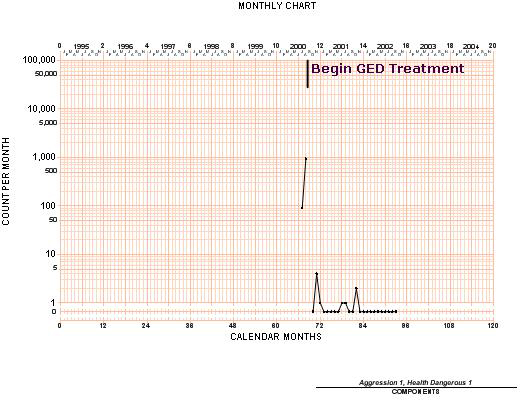 Over the next month she had over 1,000 dangerous behaviors and required staff intervention to keep her and others safe. Staff injuries included broken ribs.

Given her extensive history of failed treatment and the fact that her dangerous behaviors were increasing steadily we discussed seeking court authorization for the use of contingent skin shock. She agreed that it was worth a try since nothing else had worked and she yearned for a more normal life. She wanted to live independently in the community someday.

She was appointed an attorney by the Court to represent her and she told her attorney that she wanted to give contingent shock a try. A hearing was held before a Judge in Probate Court who later authorized the use of contingent skin shock.

The first week AS  received 8 contingent skin shocks for aggression and self-injury with 7 on one day. Over the next 52 weeks she received only 3 more. She was completely weaned off of all psychotropic medications and she was thrilled about that.

One of the biggest but immeasurable changes was her attitude. She went from rude and belittling to happy and social. Her self-esteem skyrocketed. The medications over the years had led to a large weight gain and she began to lose weight. She was clearly proud of her progress and actively participated in her educational program.

Due to her success we began to fade out the use of contingent skin shock after six months of treatment without any negative impact. She testified at the Boston State House against a bill to ban this form of treatment, telling the legislators how this treatment gave her back a life. She went out into the community weekly, which was not possible at all for the 12 years before coming to JRC.

AS was completely weaned off the contingent skin shock treatment within the first year and she was working toward her high school diploma. She did have one small set-back and the skin shock was reinstated for a short period, but in general she just continued to improve in all aspects of her life.

Over the course of her stay with us, about 27 months, AS was able to complete her education and receive her high school diploma. She took courses in a local vocational school. She started a paid in-house job in JRC’s Human Resource Department, and later a job at Friendly’s. (When she came to JRC the last place I could see her working was a restaurant where she would have to deal with many different people each day.)

She went out and got her learner’s permit as she prepared to live on her own. When she was ready to leave JRC, she moved to a group home and then later to independent living. She got married, divorced, remarried and had a baby. She trained to become a home health care aide.

I have kept in touch with AS over the many years since she graduated from JRC. Years after she left we asked if she’d like to speak at the State House again about her years of mental health treatment and how she’s done since she left JRC. She agreed to meet me in Boston, and I waited for her at the entrance to a nearby parking garage. I was brought to tears seeing her drive up in her large SUV. She looked like a confident businesswoman going to the office.

AS told the senators and representatives that day, that without JRC she would have died from her self-injury or been jailed due to her assaultive behaviors. To this day I get goose bumps every time I recount the story of first meeting her strapped to a gurney, and her subsequent progression up to seeing her driving into Boston in that large SUV. I still see her smiling face every day, as we have a picture on the wall of her working at Friendly’s.

And this is only one of the dozens and dozens of reasons that I continue to work at JRC.